Competition entry for the design of a 63.5 hectar urban park on the site of the historical Chile National Stadium.

Our proposal for the Parque de la Ciudadania transforms the site of the National Stadium from a primarily enclosed sports facility to an open public amenity through strategic reuse. By opening up, connecting and leveraging all on-site assets, the park offers new and diverse uses and spatial experiences organized around the existing and large scale built forms and refurbished “green” spaces, creating alternating relationships between what is considered artificial, natural and recreational to forge a highly activated urban space.

The site’s reconfiguration is based on:
Porous Urban Frame – By removing the existing walls and barriers to the site, the park is opened up to the city, promoting access from surrounding neighborhoods and the city beyond. Defining the perimeter of the site, the urban frame’s shifting dimensions, uses and surface treatments serves as an active public interface to the park.

Active Promenades & Spill-outs – Internal circulation is based on transforming the existing service connections between sporting facilities to active promenades (reversing the role of service and serviced) while strengthening urban interconnection therogh the park’s interior.

Differentiated surfaces and plantings around the stadia and other large scale park infrastructure – including the baseball and recreational fields – promote “spillout” of activity from these contained facilities, heightening the intensity of public uses around them while integrating them into the parkscape.

At the National Stadium this is accomplished through a series of subtle topographic shifts (0.0m to +1.5 m and -1.5 m) offering a new ‘public ring’, funneling vistors to the stadium at its entrances, while lifting and sinking the grade to form new areas for lingering, strolling, sitting, and looking out towards the park and mountainscape in the distance.

In addition to the stadium and large sporting venues already on the site, that have restricted access the park plan offers a series of unrestricted and un-prescribed large scale recreational destinations. From east to west, open soccer fields and urban rooms provide tree framed spaces, while an oversized natural grass lawn in the south-west serves as an open space to accommodate a variety of small to large activities, from reading, napping, sunbathing, playing, concerts etc. To the south of the stadium off of the central east-west promenade, new café pavilions and restaurants are interspersed within an open picnicking area.Large scale parking is situated on the east and west flanks of the stadia and on the sites perimeter.

Adaptive Ecological Management The park takes the approach that the best way to minimize environmental impact is to leave the already invested infrastructure largely intact and to work within the existing set of conditions where possible, thickening plantings and capturing water off of the paved surfaces for self-irrigation of the park. The planting scheme “feeds off” of the built areas, offering a continuous overlay to soften the presence of the large sport facilities on site. 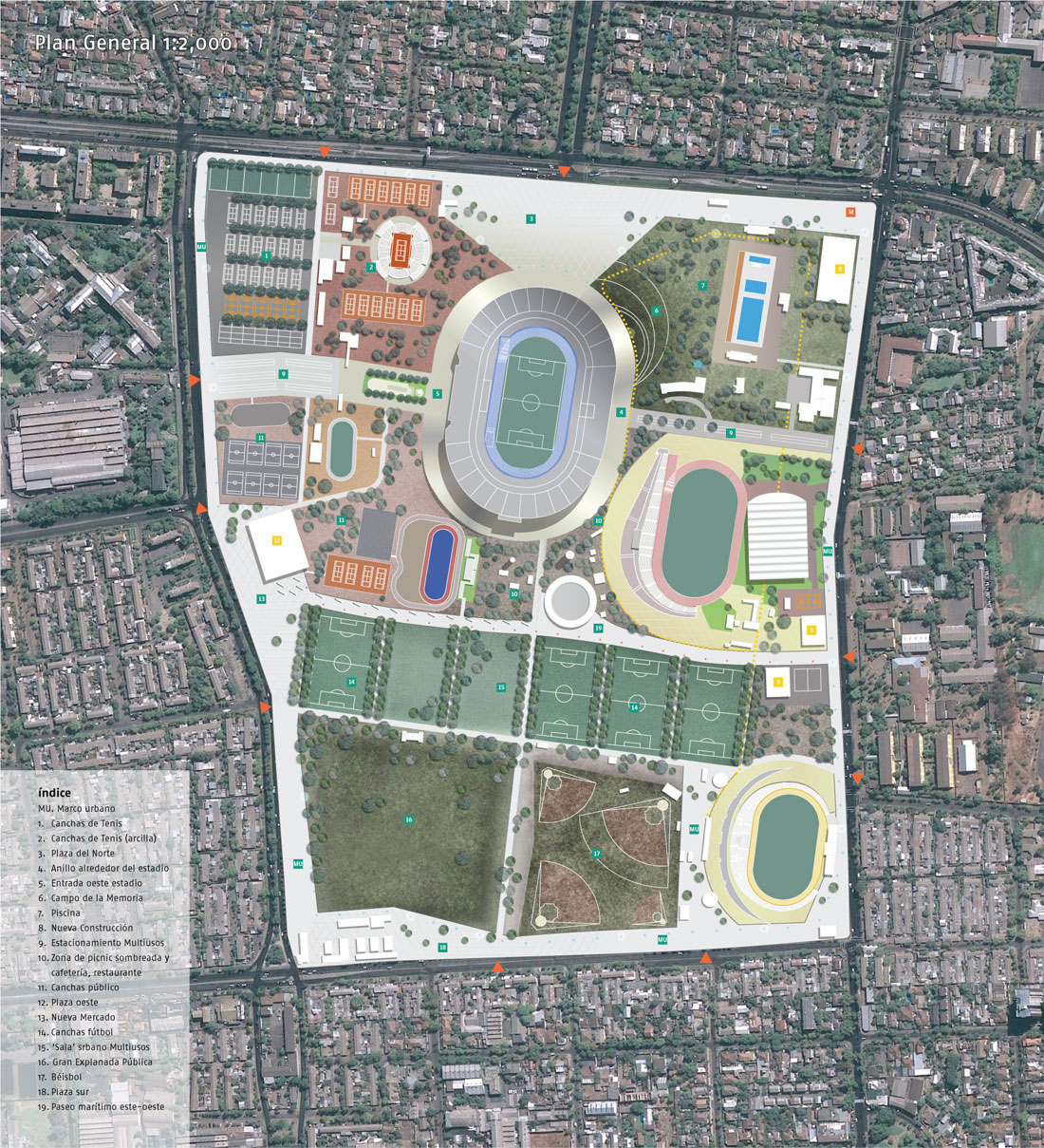 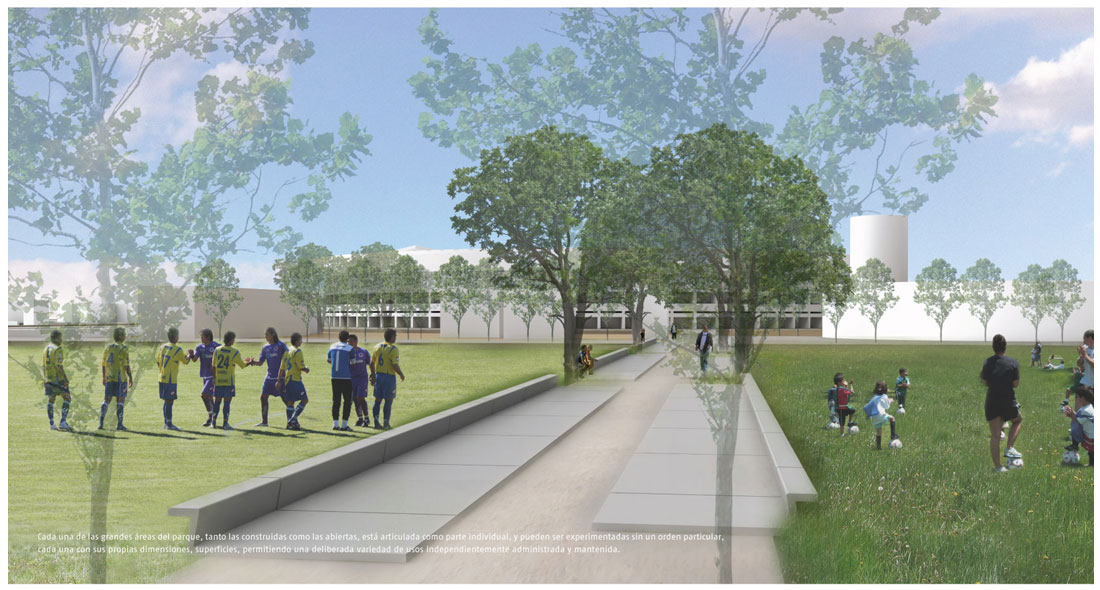 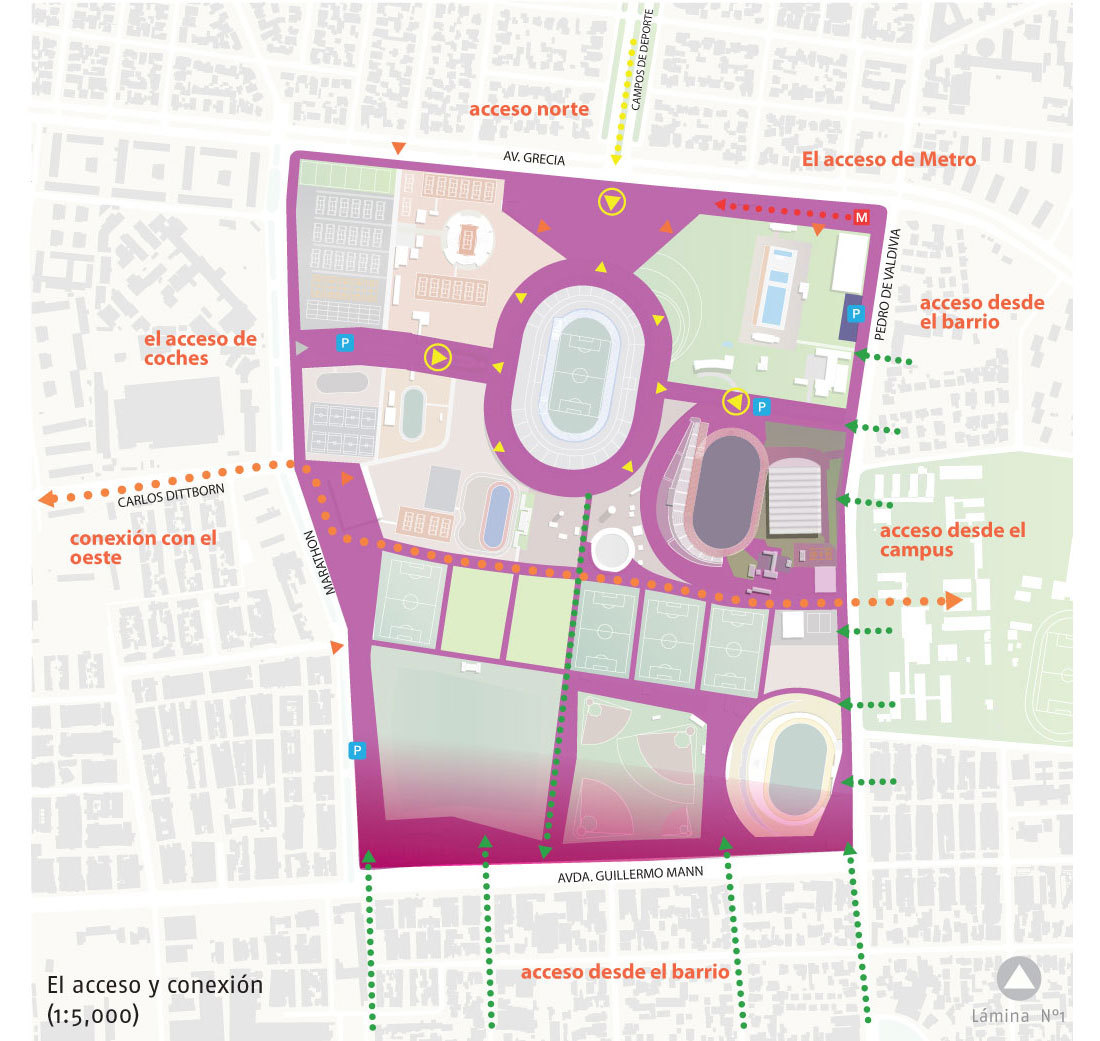 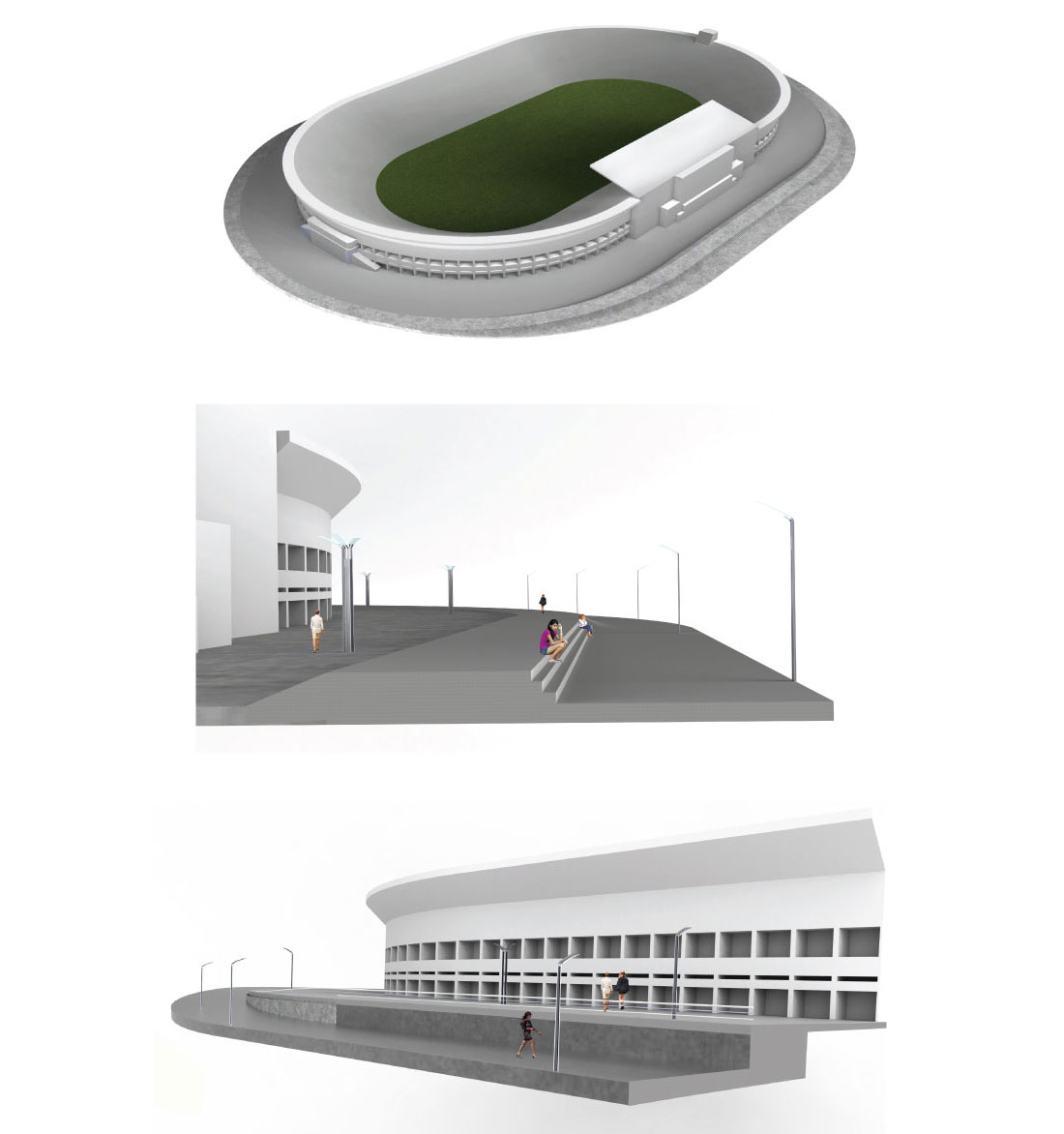 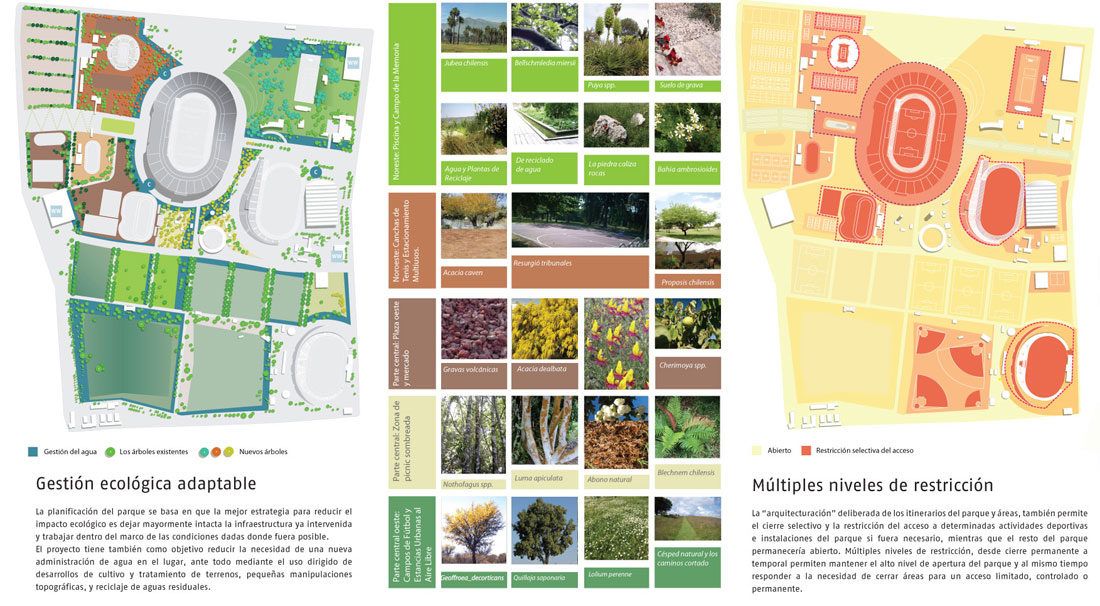 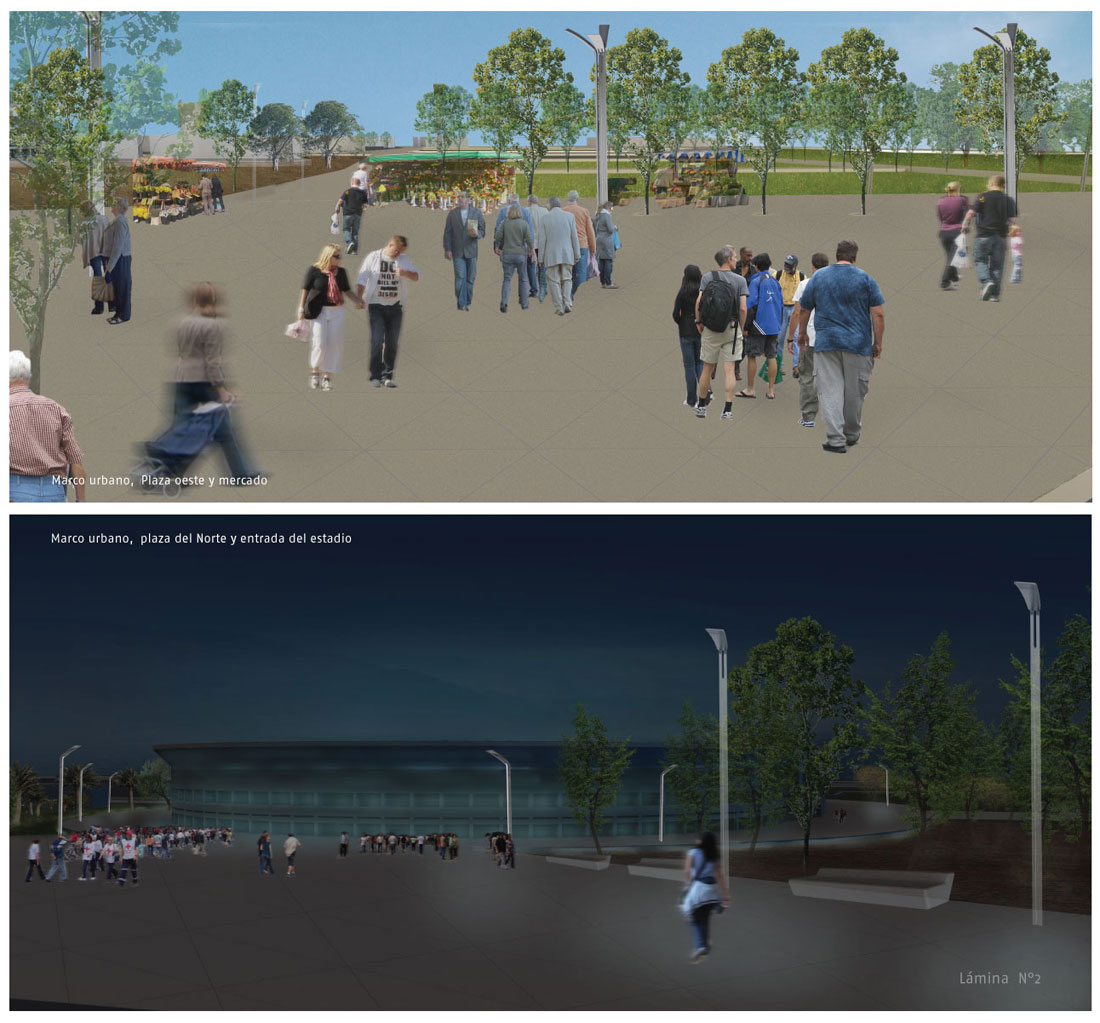 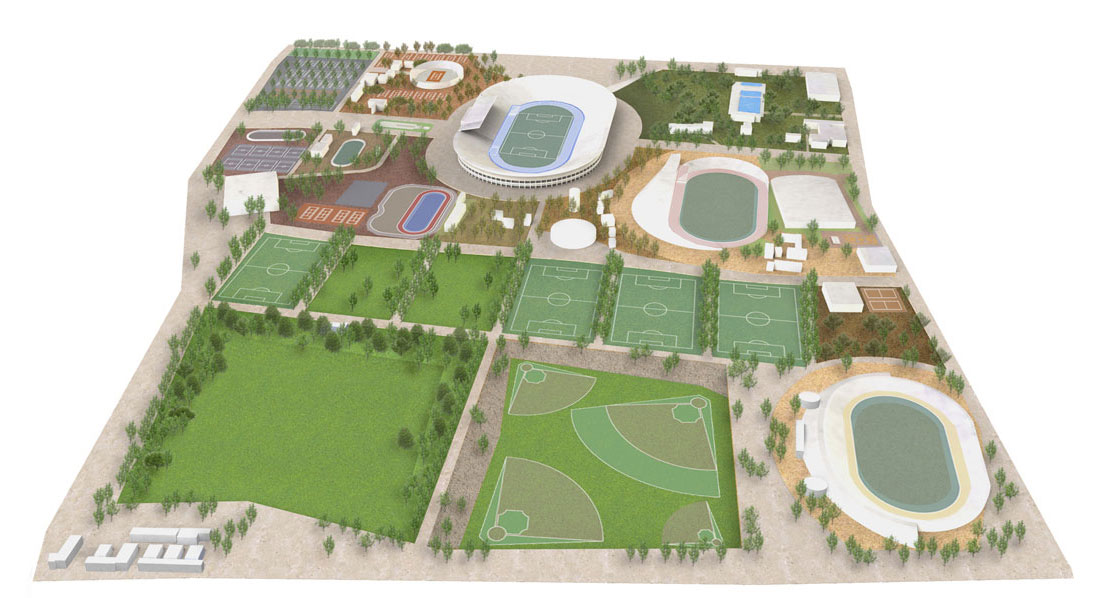